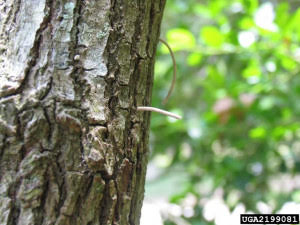 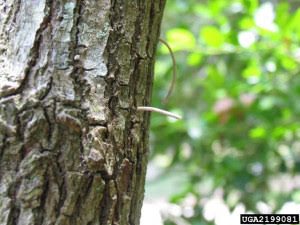 Prevention is the most reliable method available when it comes to the ambrosia beetle.  The beetle does not feed on the host tree, so systemic insecticides are not effective.  Bark sprays are the only way known to protect trees from attack.

Maintaining tree vigor can help.  Most native species will not attack healthy trees, but attack weakened, dying, or dead trees with enough wood moisture to support their symbiotic fungal growth.  Some exotic species will attack both weakened and healthy trees.

Almost the entire life cycle of the insect is spent inside the plant, making the beetles hard to control with insecticides. The only time out of the tree is when it emerges in early spring to either reinfect the same tree or to seek out a new one. There are traps that can be used to monitor the insect’s emergence in February.

Asian ambrosia beetles must be controlled but how? There are no systemic insecticides that will kill the beetles in the trees. Once in the tree, the beetle itself is harmless. It is the fungus that actually kills the tree. Infested trees will most likely die eventually.

The best way to control AAB damage is by prevention. Trunk sprays using pyrethroid insecticides applied in late February or when the first beetle is trapped offers protection. Products available to commercial pesticide applicators such as Pounce, Astro and Onyx all show great promise in controlling this pest. Homeowners should use outdoor tree and shrub insecticides containing imidacloprid or bifenthrin. Homeowners should remove affected plants or plant parts and they should be burned. The trunks of remaining plants should be treated with an appropriate insecticide and monitored.