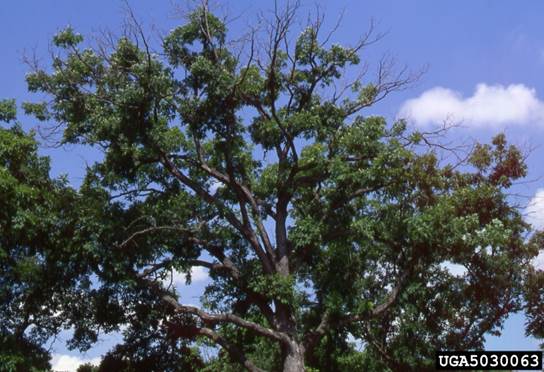 phytopthora root rot is a widespread but often overlooked disease of landscape plants. There are many species in this genus that attack woody ornamentals. These fungus-like organisms grow in the cambium and sapwood causing death of the tissue. Loss of water and nutrient absorbing capacity and stored carbohydrate reserves in the root cause a gradual, or sometimes-rapid decline of the above ground portion of the plant. phytopthora diseases are most common on soils that are poorly drained or receive excessive irrigation, and also is a common disease in nurseries. Decline and death of new plantings may result from planting diseased stock. phytopthora is a soil borne organism which does not survive well in dead tissue, but forms resting spores that can survive long periods without a host. When soil moisture and temperature conditions favor disease development, phytopthora can increase rapidly from undetectable levels to infestations.

Symptoms of root rot vary depending on the susceptibility of the plant species, the virulence of the specific phytopthora species and site (environmental) conditions. A chronic form of the disease causes a slow, progressive decline with a reduction in shoot growth, small leaves, thinning of the crown, chlorosis, twig and branch dieback and eventually death. Diseased roots are discolored, lack fine roots, and are pulled apart easily. Rapid wilting and death of the entire plant characterize the acute form of the disease. phytopthora lesions may extend into the root collar, which causes girdling of the stem and rapid collapse of the crown.

Infection can occur months or years ahead of first visible symptoms. On some plant species, symptoms do not appear until root or collar rot is advanced. When phytopthora is found on a declining plant, it is likely to be the agent causing the problem, or at least, a significant contributing factor.

Where soils are poorly drained and prone to inundation/flooding, use species that are tolerant to these soil conditions. Ensure the root collar is exposed and free of soil and mulch. Species planted on sites subject to saturated soils may require periodic treatment (annual to biannual) with fungicides to minimize new infections.

Plants exhibiting chronic disease symptoms should be treated with an approved product for managing Phytopthora. Treating surrounding susceptible plants on a preventative basis also is recommended. Improve soil drainage as needed; proper mulching, irrigation and root collar excavation as outlined under preventative treatments are recommended to reduce the incidence and severity of the root rot.